Feel the lick of the Leviathan.


In Ellsemere Port over Easter bank holiday weekend they have an international sea shanty festival. I found out about it immediately after the event this year. The sense of disappointment I felt at missing this jamboree was crushing. Unbeknownst to the festival organisers I had grown a fisherman's beard and would have walked tall in this world of facial hair and cable-knit jumpers; a wasted opportunity for which a warm chin in cold weather was no real comfort or consolation. The briny, barnacled world of sea shanties fascinates me: old men in canvas coats and flat caps smoking porcelain pipes, creating close harmonies of times under the sail, stars and moon. This subculture still has a faint whiff of piracy about it, not the type that infringes copyright, rather the dastardly variety that reeks of daring deeds and rum. It's odd that Ellsmere holds this festival. Even with its estuarine position and industrial jetties the town seems divorced from the sea, held hostage by the motorway that now bisects it and provides its life blood.


Shanties and songs of the sea were used to motivate and coordinate repetitive tasks undertaken by those who lived under the sail. The Chantyman would lead: he would call the line and the crew would echo his words as they heaved the sail or raised the anchor. In this way tales would be told, and the histories of those who existed in the space suspended between sea and soil would take on their own forms. Stories developed their own energy and life, twisting and evolving into fantastical shapes as they voyaged around the globe and through time, propelled by the winds of adventure. The Chantyman called the line with promises of beasts, battles and booty; the young and strong followed his call to the shore and beyond!

Stories of monsters have always drifted across the seas: The Cracken, The Leviathan, sea serpents and giant whales have fuelled the rhythms of the Chantyman. These beasts have poured fear into the hearts of those on both land and sea, their reputations as fierce as the stories that created them. Legends like these draw out the brave, stupid and strong; young men who set out to sea to make a name for themselves, to fight and become immortalised in the words of the Chantyman.

Whilst my stupidity is well known I am neither brave nor strong, if I chant you a line, will you follow my song?

I spend a lot of my time walking the line between sea and soil finding wave-washed gems to ascend. Ogmore, Ysgo and Dinellain have all been plundered  producing tales to motivate others. Songs of slopers and overhangs, barnacles and biceps drift along these shores. Mid Wales has been one of my main muses for some time: Clarach and Borth have both had me echoing their call, hauling me back again and again to see what new tales lie around the corner.

A recent trip across the ancient sands and shales of mid wales revealed a terrifying secret to me, one I will share; what you do with this information is beyond my control. I was trawling the rich coastline at Borth looking for fine, slick slopers of such quality they would drive a boulderer mad. As I assessed the coastline my eyes were drawn to a darkness in the cliff line, something was brooding there in the shadows, something that did not sit well with my conscience. I went to investigate. I did not know what lay there beyond the depths of my perception. What I found filled me with both awe and dread.


On that tranquil shore sits a beast, a leviathan of a line- monstrously steep and fantastically frictionless. Washed up by ancient storms it sits there fossilised by time. I approached this slumbering creature with caution, not wanting to wake it. I gazed upon it smooth yet scaly, barrelled belly scarred by single-pad, directional undercuts leading along its length to a change of angle and some actual holds on its head wall. Tension, strength, patience and persistence would all need to be used in equal measure to tame this animal born in the depths; if we add a less than perfect landing into this equation we are looking at an endeavour that legends are made of! Overcome by fear I turned and ran, knowing that I'm too weak of heart, mind and muscle to go even one round with this beast. I ran knowing that I was lucky to live to tell this tale; this line could consume you, devour your climbing career by placing you in a world of pain with years of fruitless sessions that would strip a man like me of strength, psyche and sanity. 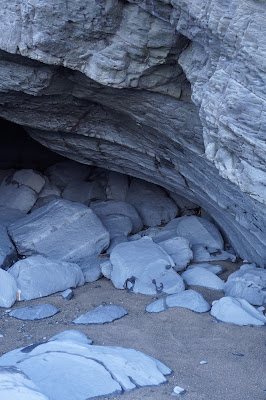 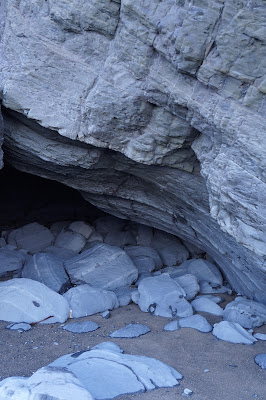 You may ask why I chant these lines- who would answer this call? Like an ancient mariner or a tainted trawler man I could just be deluded, lured into fanciful, tall tales by the romance and rhythm of the sea and the ruination of rum. However I have stood beneath many of the titans of Europe: Big Paw, From the Dirt Grows the Flowers, Ill Thrill, Dream Time and the Dagger. Borth's Leviathan could fight them all, go toe to toe, look these other monsters in the eye and know that it belongs in the same storybook. An ascent of the Beast of Borth would be legendary; a hero would be born, a killer line would be tamed and a new story would set sail across the seas creating a life of its own amongst those who toil rhythmically with brush, pad, and chalk.

I plan to go to Ellsmere Port next year at Easter. I want to sit amongst bearded men singing tales of adventure whilst sipping ales and wearing arran. I will listen to Chantymen from around the world painting pictures of a way of life now lost, a life dominated by sail, storms and seas. I would like to chant a song at the festival - tell a tale. My story would reveal a world where sand meets sea, where cliffs and storms collide in a titanic battle that never ends. A battle that creates and destroys in equal measure, a battle from which monsters are born! My story will be filled with a fight between the tides, struggles with slopers, battles with beasts, and the taming of the wild. I will be the Chantyman, will you be the hero?
Posted by SkinnyDog at 09:54

Best in the west.