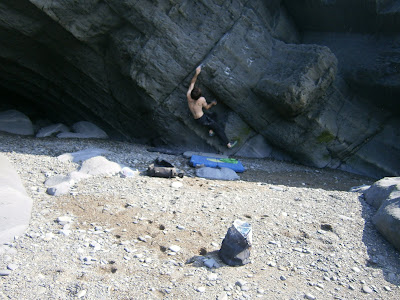 Sometimes when looking for gold an individual needs to look past the obvious and mine seams of desperate disappointment before a glimpse of a prize may be sighted. Prospecting for new Bouldering in the UK can often reflect the experience of mineral men, scratching for riches amongst thousands of tonnes of valueless rock. The productive, obvious seams that produced some of our proudest problems in Yorkshire and the Peak were exhausted years ago. North Wales’ boulder rush of the late 1990’s seems to have slowed from a torrent to a trickle. At times the prospector feels marooned, stuck on the slag heap of history, wishing a new gold rush would begin.

Obviously glittering nuggets of interest will be found in even the most overworked of boulder fields, particularly as new blood enters old arenas looking to accrue the riches and accolades of a hard first ascent. However we all dream of something bigger, finding a rich vein of rock that can be mined day after day, yielding gem after glittering gem as the seam is worked, refining these minerals in terms of difficulty and quality. Dreams are just that- dreams; electrical impulses of fantasy firing from our synapses. Energising, enthusing, but often for nought. Following the dream of discovery can be frustrating, leading to long wet walks around crumbling boulders, slumbering under their mossy blankets without a glint of gold anywhere. No gems, no return for all that time invested.

Dreams may just be dreams, but disappointment fades over time whilst the lust for gold always remains. New areas are out there! New boulders with lines waiting to succumb to our tools of excavation: chalk, toothbrushes, fingers and boots. People pan for gold because they think there is something to be found. If we stop walking, panning and sifting through this constantly eroding British landscape we might just miss that glimmering glint of quality - the shimmer of potential that lies around the next corner.

I have prospected in many places and beaten a solitary path through miles of mud and scree, however my thirst for discovery still continues to motivate me. This desire has taken me to seams of rock that few, if any, have worked. Wales holds many of these seams. Some I’ve exhausted, others I’ve yet to exploit. Mid Wales is a part of the Principality I’ve returned to time and time again. This area is generally overlooked by the bouldering mainstream, far enough from the mines, quarries, and bouldering melting pots of North Wales to slip under that scenes’ collective radar. Clarach Bay near Aberystwyth was the first place I unearthed potential, however I did not discover this venue - I simply sifted through what was left by others.

I have written about my experiences at Clarach before, and you can find this here. However I always felt that Clarach was the beginning. The problems I climbed were not part of the major deposit of bouldering on this coastline. Rather I suspected that this was merely the glimpse of glitter that pointed to riches hidden elsewhere, a waymarker on to which hope and enthusiasm would be built. Somewhere on the headland that lies between Clarach and the huge expanse of sand that frames the Dovey estuary to the north (Borth,) there had to be something hiding, waiting for its potential to be unearthed.

Every Celtic nation has its own Atlantis story. Tales of a land that lies to the west under the waves, submerged due to man’s careless nature. An ancient land, the loss of which lamented through the ages in myth and song, warns of the destructive force of the sea. The stretch of coast between Clarach, and Borth is the gateway to Wales’ own Atlantis “Cantref Gwailod.” Evidence of an ancient land litters the local beaches. At very low tide a now Petrified Forest lies mangled and buried by Borth’s shifting sands. Stepping over these mighty tree stumps who have witnessed many millennia pass, you get a tangible sense of the age of this coastline. Untouched and unfazed by the hand of recent human history, standing watch over a civilisation lost. Walking from Borth, south towards Clarach sifting through the series of shales looking for climbable lines, the ancient echoes of this coast haunt you. Borth quickly disappears from view and you feel alone, far from civilisation, transported back into a more elemental time populated by Gulls, water and rock. 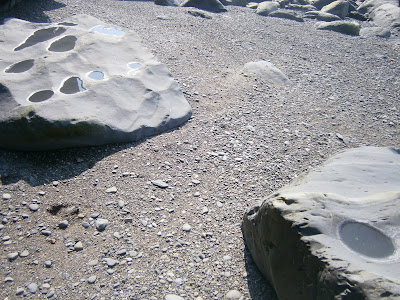 At first this journey feels futile. The rock is fractured and friable. However lines do begin to appear, rock hardened by the destructive forces that engulfed Cantref Gwailod. The constant attack of the waves and the metronomic motion of the tide have sculpted this malleable medium, hardening it into the occasional gem. These stop you long enough to break out brushes and shoes to pan for the riches that these minerals can give. These gems seem like rare, precious anomalies in the landscape; however they are enough to motivate, to drive you ever further from the bustle and safety of the beaches and closer to the now silent peal of Cantref Gwailod’s warning bells. The journey continues around this shore line, the sound of the lapping waves sooth as the lack of major discovery jarres and disappoints. However, another headland, another bay, the cliffs build, the rock bands thicken, the frequency of discovery increases, as does expectation and enthusiasm.

An hour into the journey, an hour from people, cafes and cars, I stand speechless. I’ve never won anything in my life, however stood there looking at these boulders, some of which are as big as houses, I had a real sense of winning the jackpot, winning the bouldering lottery, gaining riches which would sustain my climbing life for a substantial period of time. The gem- like problems here and there along the coast lead me to this place. No need to sift and pan for gold now, rather an opportunity to exploit a rich seam, where problem after problem has succumbed to this industry between the tides. Wave-washed shales, greywhack, overhangs, mantels, prows, campuses and technical walls climbed at a range of grades have been excavated from the rubble. Others who want to join this gold rush must time their journey well. The long trudge through these ancient stones will bring you to these boulders, however they can only be exploited for three or four hours before the merciless tide rolls in again, engulfing the boulders and everything that lingers there.


I’m not going to tell you where these boulders are exactly. Grid references, GPS, and satellite images that lead you like the Pied Piper to this destination would detract from the adventure, discovery and magic that permeate the climbing experience on this coastline. I have included some videos, and photos that document some of the developments far, this should whet the appetite. This is enough to get you started. Suffice to say, walk along the coast at low tide, follow the base of the cliff and search for the riches. Pick off the problems and let them lead you south to the mother load, the rich seam of wave hardened rock that lies around the headlands out of sight of all save the lost souls of Cantref Gwailod.


The bouldering on this neglected piece of Mid Wales coast line, populated by fishing boats and sea gulls will not be to everyone’s tastes. The ambitious power athlete will find lines that suit here; however the effort that needs to be taken to enjoy these golden problems will put many off. Those who enjoy bouldering within a landscape, not just using it but interacting with it will enjoy this venue. Pulling down on slopey crimps with the smell of brine in your nostrils, the call of the sea birds in your ears and the warmth of the sun on your back is a hypnotic sensory mix that will leave you eager for more. I believe there is more to be mined here. I have only prospected part way round this stretch of coast. If you too lust for the rich experience of hidden lines in Britain’s mineral mix then see what you can find between Clarach and Borth. At low tide with the sun high in the sky the bells of Canterf Gwailod may sing to you from the depths, revealing the secrets held within the shales. 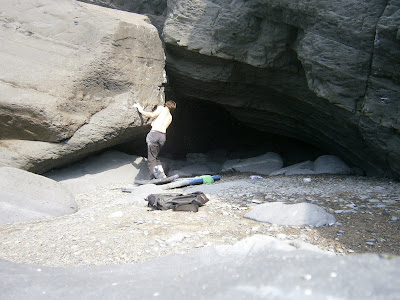 Me scoping the line that became "A Skinny Heel" V6

(Appologies for the rough video edits, but I just wanted to get this information out there, it has been a long time comming)

Cheers Owen
Posted by SkinnyDog at 09:21

Best in the west.